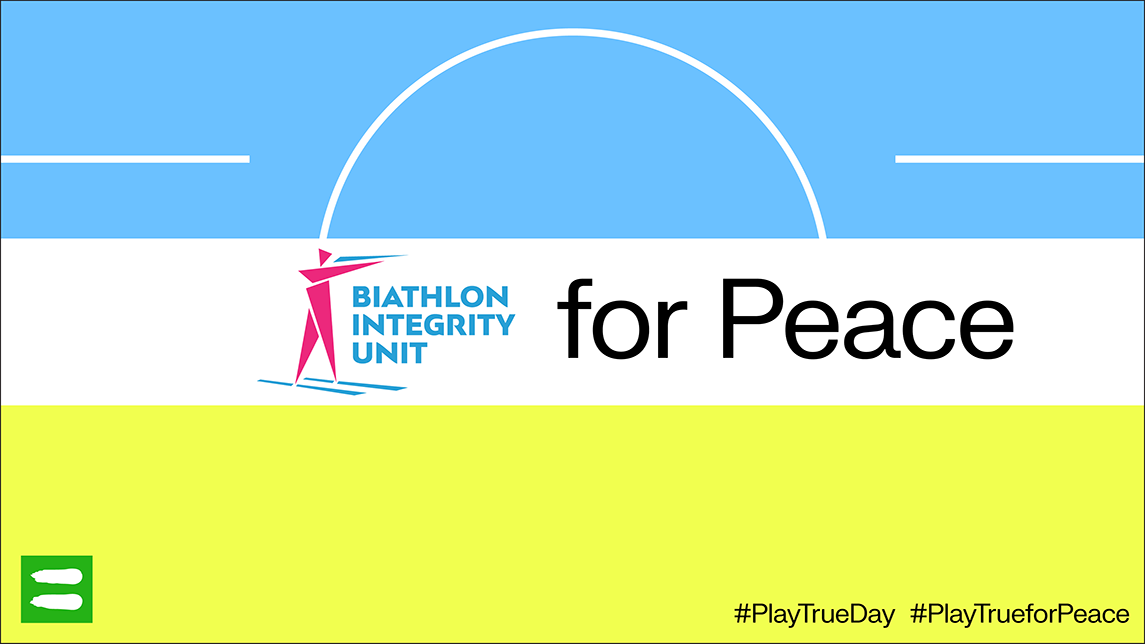 The BIU is teaming up with The World Anti-Doping Agency (WADA) and other members of the global anti-doping community to take part in Play True Day for Peace on 8 April 2022.

On behalf of the Biathlon family, the BIU is using the occasion of Play True Day for Peace to express our solidarity with the people of Ukraine as they fight to regain peace in their country. Our sport shares their values of friendship, endurance, camaraderie, inclusion and peace.

WADA President Witold Bańka said: “In light of the war in Ukraine, WADA considered postponing Play True Day this year. However, after consulting with a number of our stakeholders worldwide, we decided to go ahead with Play True Day for Peace. The feeling is that values such as fairness, integrity and respect for rules — which are embodied within the Play True message — contribute to harmony in sport and society.”

This year, the BIU joins the global anti-doping community in standing with WADA in solidarity for peace, by:

·         Sharing them on our social media channels with the hashtags #PlayTrueDay and #PlayTrueforPeace; and

·         Following the campaign in real time via WADA’s dedicated Play True Day wall that will capture all posts with the #PlayTrueDay and #PlayTrueforPeace hashtags.

The campaign is being supported by our athlete ambassadors, Anastasiya Merkushyna (Ukraine), Julian Eberhard (Austria) and Sebastian Samuelsson (Sweden).

Anastasiya Merkushyna said: “When a painter draws a picture, he has a sense of accomplishment after finishing it. However, when an artist simply buys a masterpiece pretending it is his work, he can become famous and rich, but deep inside there always will be the knowledge that he didn’t deserve it. I want to be a true creator of my success.”

Julian Eberhard said: “Living together in our society depends on honesty and sincerity. Sport in particular has a model effect in this respect. Playing true creates trust in yourself and in the people around you.”

Sebastian Samuelsson said: “The whole foundation of sports is about fair play! I always aim to play true both in sports and in my personal life!”

Since 2014, WADA has invited athletes, National and Regional Anti-Doping Organizations, Sports Federations, Governments, Major Event Organizers and all other anti-doping stakeholders worldwide to join the Agency’s social media campaign to celebrate ‘Play True Day’ — a day that is traditionally dedicated to raising awareness about the importance of Clean Sport among athletes, the public and others.

The inspiration for Play True Day stems from a WADA-hosted Education Conference in 2013, which was attended by 17 South American countries. While the event started as a small South American initiative, last year, the social media campaign reached over 87 million people worldwide.

The Biathlon Integrity Unit is an operationally independent and specialised unit of the International Biathlon Union. It was established in 2019 in order to ensure all of Biathlon’s stakeholders can have confidence that ethical issues in the sport will be address