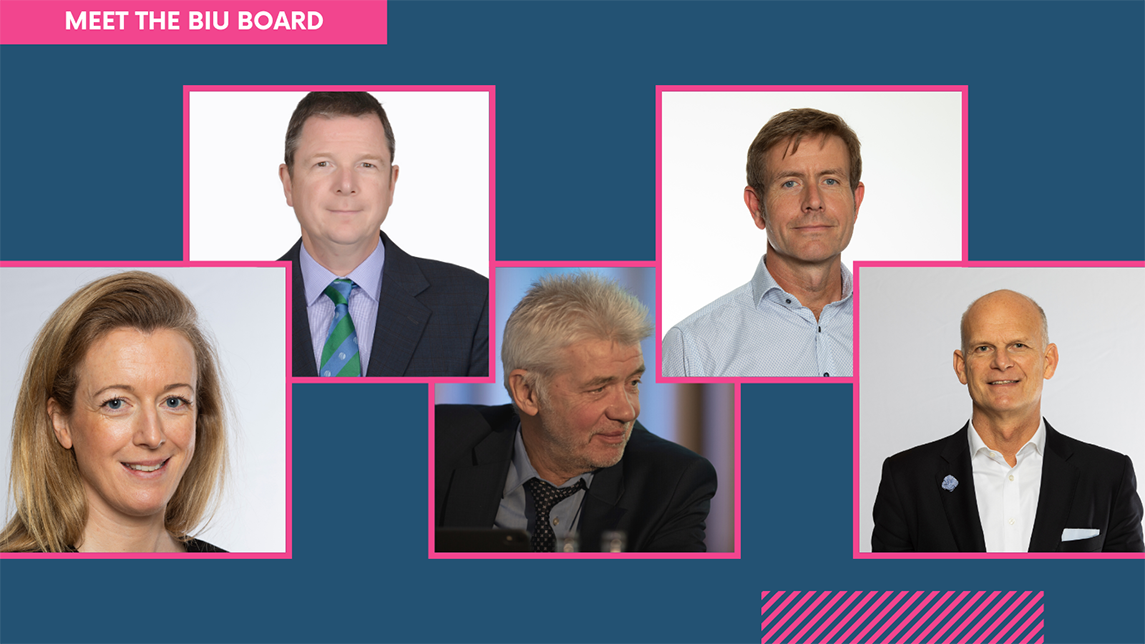 The Biathlon Integrity Unit is governed by a five-person Board.

The present Board, the first since the BIU was established, was appointed at an Extraordinary Congress meeting of the International Biathlon Union held in October 2019.

The Board is made up of:

The Board is responsible for governing the BIU and ensuring it carries out its role and responsibilities in accordance with the IBU’s Constitution and the BIU Rules.

So who are the Board members? What experience and expertise qualified them for their role, and what motivated them to join?

Louise Reilly  – Chair of the Board

Louise Reilly is an Irish barrister specialising in sports law and international arbitration, with extensive experience in relation to sports integrity matters (including anti-doping) and governance.

“I am an Irish barrister and have worked in the field of sports law since 2008, first as Managing Counsel at the Court of Arbitration for Sport and more recently as an independent barrister representing sports bodies in regulatory matters. I have extensive experience in governance matters, particularly anti-doping, and represent parties in proceedings before domestic and international tribunals.

“In addition to my work as a barrister, I am regularly appointed by international sports bodies to investigate or adjudicate allegations of wrongdoing. I am a member of the UEFA Club Financial Control Body Appeals Chamber, FA Judicial Panel, and International Weightlifting Federation (IWF) Independent Member Federation Sanctioning Panel.

“I also sit as an arbitrator in anti-doping and other disciplinary proceedings, and am a member of the Panel of Arbitrators and Mediators of Sport Resolutions, UK.

“I believe that effective governance is best served by delegating integrity-related issues to an operationally independent integrity unit. The fact that the IBU was willing to dedicate significant time and resources to establishing the BIU indicated to me that the Executive Board was taking governance reform seriously. That genuine desire to improve and foster good governance encouraged me to become a member of the BIU board.

“Being part of a dynamic, enthusiastic and hard-working team motivates me. Members of the BIU recently met with National Federation presidents and the feedback on the positive impact the BIU was having on the sport of biathlon was extremely encouraging.

“I believe that the emphasis on intelligence and investigations as a means of deterring and detecting doping has been one of the most important shifts in how the IBU regulates its anti-doping programme.

“Currently, the biggest integrity threat to biathlon is doping but the BIU is aware that other threats such as competition manipulation exist, and we are taking steps to identify and prevent other integrity breaches.

“I strongly believe in the principle of fair play, both on and off the field. I also believe that those in charge of sport should be held to the same high levels of conduct and accountability to which we hold athletes. Through my own participation in sport, particularly running and cycling, I have experienced the power of sport to foster and develop friendships, unite people, and create common goals. Sport is far more than entertainment; it has great potential as a force for good and that is worth protecting.”

“I am a founding board member of Germany’s newly-established National Anti-Doping Agency, having previously been Chairman of the former Legal Commission of the German Sports Association against Doping. I also acted as a Legal Expert in several hearings and statements at the German Sports Committee of the German Parliament, in order to pass a German Anti-Doping Statute. Finally, I act as (presiding) arbitrator for doping cases at the German Court of Arbitration for Sport.

“I was attracted to become a member of the BIU board by the opportunity to be an initial part of the newly-established, modern and necessary governance structure of the IBU. I am motivated to contribute to professional, effective and successful protection of the sport of biathlon and its athletes against illegal and unfair activities, including doping.

“Since joining the Board, I believe we have established a professionally trustworthy, working BIU team that has prevailed in all contentious doping cases since the BIU’s inauguration.

“As with most sports, the biggest integrity threats to biathlon are doping and corruption, driven by financial, political and/or individual motives and pressure.

“My own sporting values were formed through my experiences as a young, enthusiastic sportsman in high school and at my basketball club (I was a soccer and basketball player in my home town, the famous sporting centre of Leverkusen, where the chemical company Bayer AG is a prominent sponsor of sport). As a result, I was taught by teachers and trainers in a professional, well-supported sporting environment. This helped me understand the social value of competitive sports and of its athletes as (clean) role models to help form the values of young sportsmen and women, including competitiveness and fairness in a high-performance culture.”

Alex Marshall is the Head of the Anti-Corruption Unit of the International Cricket Council, which focuses on preventing corruption in world cricket through education, investigation and prosecution.

I worked in law enforcement for 37 years before moving to anti-corruption and wider integrity issues in cricket, four years ago. So I bring more than four decades of experience of keeping people safe, fighting corruption and catching criminals and cheats.

Biathlon is a fascinating sport, requiring a range of skills and abilities, such as endurance, speed and accuracy under pressure. I’m motivated by the idea of fairness for all those participating and watching such a demanding sport.

My ‘day job’ is working to ensure the integrity of cricket. Cricket is a summer sport (it’s always summer somewhere in the cricket world) and biathlon is a winter sport. This gives me a perfect balance!

The most important developments at the BIU since the board was set up are:

·         The establishment of our independence within the sport

·         Our preparedness to take on difficult and high-profile cases, without fear or favour.

The biggest threat to the integrity of biathlon is the existence of people willing to persuade and assist athletes to cheat. We need to work with and educate all within the sport to keep these people away and make biathlon resistant to this ever-present threat.

My two sports (when I was younger) were distance running and cricket. I believe my sporting values are founded on these origins.

From marathon running, I know how many hours of honest painful effort are required to improve. The idea that someone else might get to the finish line through short cuts and cheating appals me.

The Spirit of Cricket is a long-established concept of fairness. Cricketing terminology abounds in the English language. ‘It’s just not cricket’ can be used to declare unfairness in any setting.

As an avid sports fan, I’m attracted to the idea of a level playing field and a respect for the rules, protocols and traditions of each sport. The outcome should always be fair.

Dr Franz Steinle is an IBU Executive Board Member, President of the German Ski Federation and former judge of Stuttgart’s high state court, serving as a link between the IBU and Biathlon Integrity Unit Board.

I have been working in sports for almost 50 years in various positions. These include:

·         and subsequently, as President of the German Ski Association for nine years.

As a lawyer and former judge, I have also been repeatedly entrusted with sports law and sports ethics issues. Since the founding of the German National Anti-Doping Agency, I have been a member of the NADA Legal Commission and a member of the advisory board of the German Sports Law Association for many years.

“For me, a clean and fair sport comes first. In order to contribute to this, I am happy to participate as a liaison member between IBU Executive Board and BIU Board.

“I believe the BIU Board’s greatest accomplishment to date is to have built an operational, full-time workforce within the BIU, under the leadership of Greg McKenna, that is able to focus more on strategic objectives.

“I still see the biggest challenges for the BIU lying in the fight against doping, and it remains important to find new ways to combat doping. But prevention is also particularly important. Of course, there are also other threats, such as match fixing. Currently, we are not aware of any cases in biathlon, nevertheless you have to be aware of its dangers. Finally, safeguarding is also an extremely important issue.

“Sport is very important to me. It’s an integral part of my life, and I am still active in sport, four to five times a week. I believe that sport plays an important role in both physical and mental health.”

Greg McKenna is a former Senior Law Enforcement Officer from the UK. He has significant experience leading major investigations into serious and organised crime.

“Prevention is always better than cure, so the work I have done previously with communities to avert young people from becoming involved in crime does assist. I also have significant experience in gathering intelligence. Understanding the biathlon family and identifying any potential risks are of vital importance, as this informs the type of education we deliver, as well as any investigative measures that may be required.

“A long time ago, whilst working as a police officer in a deprived area of the UK, I saw the level of influence sportspeople had on young people who had limited support and, often, no role models in their lives. They had little choice but to look to those involved in sport for inspiration. When I saw this role advertised, I felt that my law enforcement experience could contribute, both in supporting young athletes, and also in developing future sports role-models.

“We have so much more work to do in this area. However, we have begun to build an element of trust within the biathlon family. For me, if the BIU is to be successful, we must build trust across the sport.

“The most important developments at the BIU since its launch have been a more focused sample collection and testing process, which with improved intelligence will continue to improve.

“The biggest integrity threat to biathlon is the lethargy or reluctance of members of the biathlon family that prevents them from coming forward and reporting any wrongdoing.

“My own sporting values were formed by role models in my life, such as my father and the football coach of my youth team. Both of them were clear that hard work and respect for others were key attributes not only for my role within the team, but also as part of a wider community.”